If you asked me 12 years ago, when child #1 was born, if I’d find myself baking a cake sinisterly named The Creeper, my response would have been ‘huh?!’ followed by ‘heck no.’ But with two boys mad on Minecraft in the house, this day was inevitable. Well, here it is, in all its neon green glory – attempt #2 at a Minecraft cake: Introducing The Creeper!

Btw, this is the second Minecraft cake I’ve baked in two months, the first one being here, and boy, was that a hit.

For the unintiated, Minecraft is a computer game based on creativity and building, which seems to have captured the imagination of kids and adults alike, despite its pixelated, relatively unpolished appearance. My kids were horrified when I previously described it as an “online Lego” with extra elements, versions and web flexibility.

The Creeper, inspiration for this cake (see left for his ‘true’ appearance online), is a creature that can cause – gasp – damage to the player and his/her blocks. They spawn at night and are, apparently, most dangerous when they’re most silent.

This Creeper, luckily, didn’t have a chance to do any damage, with innards made lovingly of homemade chocolate cake and chocolate buttercream frosting. His neon green face, like the Minecraft Cake I did in February, is made (from scratch) of marshmallow, into which I kneaded lots of green food color (evidence still to be found on hands). Read that post if you’d like to try your own hand at the meta creative task of crafting a Minecraft cake, and see the former results below. 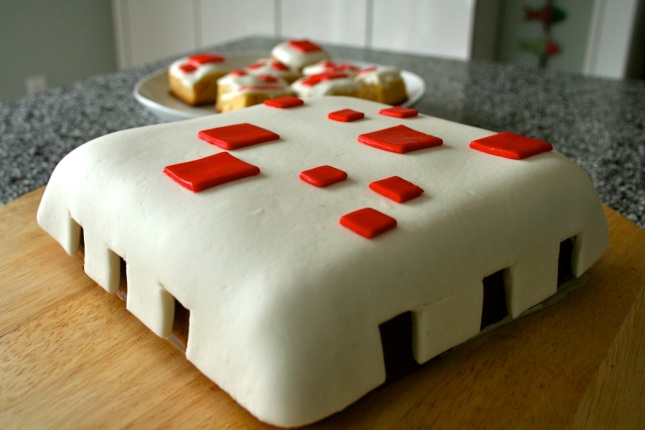 Many years ago, in a tropical paradise far away, a little girl grew up in a jasmine-fringed house with orchids, mango trees, papaya trees, banana and coconut palms, jackfruit, soursop, tomato vines and a curry plant. She watched as her Gran cooked and baked in a fragrant kitchen full of chatty female relatives, and, clutching onto her sari, tagged along as she distributed freshly made treats to the neighbors. The girl took a bite of her favorite cookie – a sooji biscuit, powder-crumbly and melt-in-the-mouth buttery – and fell in love with food.

That was me, and I have been cooking since I was ten. Having lived in Malaysia, Singapore, London, Toronto and now, the US East Coast (along the way marrying my British-Jewish sweetheart from Bloomberg), I started this blog in the hope of passing on to our two kids our favorite family recipes from a combined rich cultural heritage, and inspiration picked up from our family’s sojourn on three continents.

Please drop by and say hello, and share your story and recipes, too.

(All text and photographs are copyright protected. Please do not copy or reprint without permission)